In this overview, you’ll find the answers to the questions asked during the AMD Masterclasses; The Basics of AMD held on 18 March – and Advanced AMD held on 8 April – presented by optometrist and lecturer Ingebret Mojord.

Read Ingebret's bio
Jump ahead
Q1 How sensitive is the visual field testing for detecting AMD at an early stage if you don’t have an OCT? And which test and strategy would you recommend in general?

How sensitive is the visual field testing for detecting AMD at an early stage if you don’t have an OCT? And which test and strategy would you recommend in general?

In Goldstein’s study, the modified Amsler grid was used (white lines on black background), having observed positivity in 53 % of the patients with choroidal neovascularisation, while in the present study, 70 % of positivity was found when the original grid was used (black lines on white background). The preferential hyperacuity perimeter has greater sensitivity than the Amsler grid in the detection of choroidal neovascularisation among patients over 50 years. It is a promising method for monitoring patients with age-related macular degeneration.

Finally, Faes et al. concluded that results from small preliminary studies show promising test performance characteristics for the Amsler grid and the preferential hyperacuity perimeter in the diagnostic work-up of wet AMD. Based on test performance, the Amsler grid showed some advantages in ruling in wet AMD and could thereby be more helpful in monitoring the disease, but data were very heterogeneous. The preferential hyperacuity perimeter, in return, had small advantages over the Amsler grid in ruling out wet AMD and could thereby be more useful in the screening context.

Faes et al. Diagnostic accuracy of the Amsler grid and the preferential hyperacuity perimetry in the screening of patients with age-related macular degeneration: systematic review and meta-analysis. Eye (2014) 28, 788–796.

Yet, to what extent our findings can be transferred to a real clinic or practice still needs to be established. In addition to that, we’re seeing some new promising technologies emerging with theoretical advantages over the Amsler grid and the preferential hyperacuity perimeter, which need a careful clinical examination to confirm their usefulness in a screening and monitoring context. If confirmed, further studies assessing their impact on patient management still need to be quantified.

What is your opinion about the vitamins/pills that are supposed to slow down AMD development or decrease the chance of developing AMD?

There is no recommendation of taking any supplement before the intermediate level of risk factors is reached. See the guidelines from The College of Optometrists (UK) below. 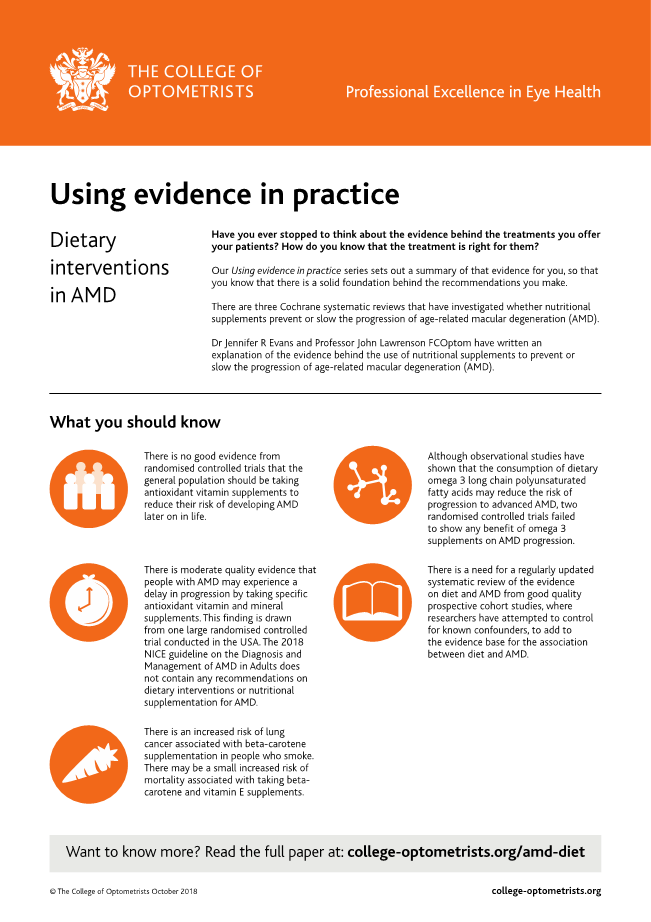 Which is most common, type 1 or type 2 neovascularisation? Do they respond equally to treatment? Or is one of them worse than the other?

There are different neovascular subtypes, and it’s different from culture to culture. As evidenced by FA (Fluorescein Angio), occult lesions accounted for 49.6% of cases, whereas type 1 lesions were estimated to represent 39.9% by OCT. Classic lesions were found in 12.0% of cases, whereas type 2 lesions by OCT were estimated to represent 9.0%. And finally, RAP lesions were identified by FA in 28.6% of cases and in 34.2% of cases by OCT. Mixed lesions represented 9.8%, and 16.9% of the FA and OCT analysed images.

As a result, the use of OCT enhances the capacity of clinicians to detect type 3 lesions, which might be missed when performing an FA-based approach.

In an observational retrospective series of 154 eyes in 138 patients with neovascular AMD managed with treatment and extended regimen (TER), those patients with type 1 neovascularisation were significantly more likely to maintain good vision than other neovascular subtypes. It was also evidenced that vision achieved at three months following the initial intravitreal treatment was the best predictor for favourable long-term vision. The positive visual outcome was considered to be 20/60 or better.

What is the best optometric practice for follow-up in the different AMD situations, in your opinion? Especially dry AMD - how often do you see the patient?

Suppose there’s a high risk for developing choroidal neovascularisation. In that case, I see the patients more often – depending on their motivation and understanding of the risk factors and home testing possibilities.

What are the risk factors of diet low in Omega 3 & 6, vitamins and minerals?

There is no good evidence from randomized controlled trials that the general population should be taking antioxidant vitamin supplements to reduce their risk of developing AMD later on in life. Although observational studies have shown that the consumption of dietary omega 3 long-chain polyunsaturated fatty acids may reduce the risk of progression to advanced AMD, two randomized controlled trials failed to show any benefit of omega 3 supplements on AMD progression.

If you search in the Cochrane library on ‘antioxidant vitamin and mineral supplements for preventing age-related macular degeneration’, this is what you’ll find:

The Cochrane researchers found five relevant studies. The studies were large and included a total of 76,756 people. They took place in Australia, Finland, and the USA. The studies compared vitamin C, vitamin E, beta-carotene, and multivitamin supplements with placebo.

The review showed that, compared with taking a placebo:

None of the studies reported quality of life or resource use and costs.

Is there any evidence for the use of filter glasses (511/527 wavelength) preventing harmful light for young people (who show early signs of drusen in the macula)?

People above 50 years old do not have the Dx of AMD. There is no evidence of using yellow lenses for AMD.

I have some younger patients, 30-40 years old, who have a pigment dispersion close to macula, but no development over the years. What is the cause of this condition at an early age?

Maybe some form of dystrophy or an earlier accident? There are many diseases that have to be excluded from the AMD diagnoses.

At what stage of AMD do you see the first changes on an Amsler test?

When the risk of neovascular development is realistic. For example, when patients are in the position to use the Amsler in a system and turns up at least at intermediate or high risk for developing late AMD.

Where do I find a calculator that can predict the risk for AMD?

One of the calculators I use is this one.

Are the Valeda treatment tried in other macular diseases than AMD (i.e. Histoplasmosis)?

The indicated use is for treatment of ocular damage and disease using photobiomodulation, including inhibition of inflammatory mediators, edema or drusen deposition; improvement of wound healing following ocular trauma or surgery, an increase in visual acuity, and contrast sensitivity in patients with degenerative diseases such as dry age-related macular degeneration.

But the key focus at this moment is the Treatment of Dry Aged Macular Degeneration. The first pilot studies in the US & EU have started treating DR & DME patients.

Possible next steps in the future will be to explore the treatment of Glaucoma, Methanol intoxication, Retinitis Pigmentosa, retinopathy of prematurity, Leber’s hereditary optic neuropathy, amblyopia, and possibly others.

What's the difference between macuShield and ocuvite?

The AREDS mixture is the absolute recommended nutritional supplement.

What about drusen outside the macula. How do they impact the risk of developing AMD? Should the conversation start there?

There is no consensus about the connection between peripheral drusen and drusen associated with the AMD.

How many potential customers will you have in your hometown? You only mentioned 42 persons?

In the masterclass, I first mentioned the prevalence:

The following slides from my masterclass then touched upon incidence (how many new cases per year) of late AMD per year (neovascular or geographic AMD):

2/3 of those have neovascular AMD. So you can calculate from this information how many new wet patients there should be in your area.

Could optometrists acquire the Valeda system and treat AMD without starting a war between the professions and the optometrists?

Would treating (supplements and PBM) on the basis of dark adaption loss alone be indicated? Would it be accepted among ophthalmologists?

I don’t think dark adaption reduction itself should be an indicator for nutritional supplement or PBM. You should have at least intermediate drusen or intermediate risk factor for progression to late AMD.

About Valeda, you said that it is only in Norway? Is that correct, and do you know how many clinics in Norway offer this now?

I would expect this treatment to become more common in all markets.